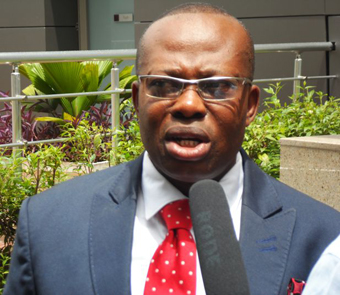 Since the advent of Sanwo-Olu as the governor of Lagos State there has been a resurgence of land grabbers and thuggery all over Lagos. Recall that Governor Ambode through Land Grabbing Law put them in check during his administration by effectively implementing the law. Presently, that is not the case.

I am amazed that someone who claims to be the owner of a property and further claimed to have a judgement of the supreme court will be surveying the land he owns upon invasion. Who does that?
The policemen in Lagos are hereby put on notice to look through the lies and forgeries of these land grabbers and give justice to the genuine owners. My client has a certificate of occupancy over the property since 1989 and have been in physical occupation with evidence of payment of utility bills yet these shameless animals are claiming that they are in possession through the invasion that took place last Monday! Lagos State governor should be alerted of this resurgence and it is a smear to the Centre of Execellence!

Last Monday, some notorious land grabbers with thugs and armed mobile policemen invaded my client’s property in Opebi employing self help to enforce a purported Supreme Court judgement delivered in 1995 that has no bearing to the land in question. My prompt petition to AIG Zone 2 put them in check. They have started re-surveying and at the same putting borehole water on the site before they were repelled by arrest and undertaking to maintain status quo until the AIG looks into the matter today being the 16th of June, 2020. The story is that some lands they invaded in similar fashion are nearing completion in building as they have taken complete possession and commenced development. The Supreme Court judgement and Form O they are brandishing about have no bearing with the land in question. They are ready to compromise every government agency including the judiciary with so much money. The land grabbers work in concert with investors who put down money in millions for them for the “fight”. They forge court documents, survey including certificate of occupancy. Those forged documents are ensued to appear genuine through compromising the land registry, survey department and the judiciary. In my index case, I saw surveyors on the site when they invaded and I suspected those surveyors to be from the Survey Department of Lagos State and they will be ready to backdate the survey for them.