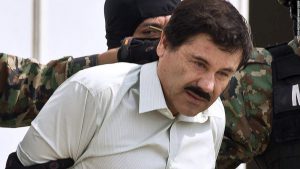 Notorious Mexican drug kingpin Joaquin “El Chapo” Guzman will appear via video at his next appearance in Brooklyn federal court because of security concerns — and to avoid the hassle of transporting him from jail, sources told The Post.

Judge Brian Cogan said in an order Wednesday that Guzman’s arrangement is to “minimize disruption from physical transportation.”

A law-enforcement source said the plans were made to mitigate security concerns and also because taking Guzman from the Manhattan jail to Brooklyn court would be a “pain in the butt.”

Guzman, who’s twice escaped from prison in Mexico, has been in US custody since his extradition last week and is being held at the Metropolitan Correctional Center in Manhattan.

Last week, more than a dozen police vehicles escorted Guzman to the MCC after he landed at MacArthur Airport on Long Island.

Guzman pleaded not guilty last week to a 17-count indictment charging him with drug trafficking, money laundering and murder conspiracy.

He is being held without bail.