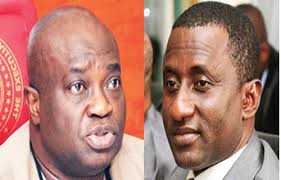 The Nigerian Supreme court has adjourned until 12th of May the appeal filed against the Abia state Governor, Dr Okezie Ikpeazu. The apex court heard the arguments of counsels in the matter today.

Counsel to Governor Okezie Ikpeazu, Chief Wole Olanipekun, SAN submitted that the trial court was in grave error when it based its findings on forgery when the plaintiffs founded their case on false information. According to the Chief, even if Ikpeazu were not a public officer at the material time, tax and its payment are not conditions precedent for elections into the office of the Governor under the 1999 Constitution. He drew the court’s attention to its latest decision in the Cross River State case where it held recently that any issue outside the key qualifying conditions in the constitution cannot disqualify any person from contesting. He urged the court to affirm the judgement of the Court of Appeal and dismiss the present appeal as empty and lacking in merit. Counsel to the PDP, Dr. Onyechi Ikpeazu, SAN  also urged the court to throw away the appeal as being frivolous.

A drama  occurred at the Supreme Court during the hearing,Counsel to FN Nwosu took the floor to make his submissions. He looked nervous and confused. He then made conflicting prayers to the court, asking the court to allow the appeal in part and also declare FN Nwosu Governor. This rather conflicting Prayer attracted the anger of the Supreme Court Justices who asked him what his interest in the case is. At this point, the young man became totally confused. Counsel to Ogar, Dr. Alex Izinyon, SAN threatened to petition the lawyer to the NBA and even the Justices themselves threatened to revoke his right to practice law for displaying such embarrassing level of incompetence. The thoroughly confused young lawyer told the Court that he just inherited the file and is a young lawyer. He then applied to withdraw his brief of argument which the Court granted and slammed a cost of 200,000 Naira against him which must be paid by the chambers that sent the lawyer to the Supreme Court. He also applied to withdraw FN Nwosu’s brief in the second and third appeal