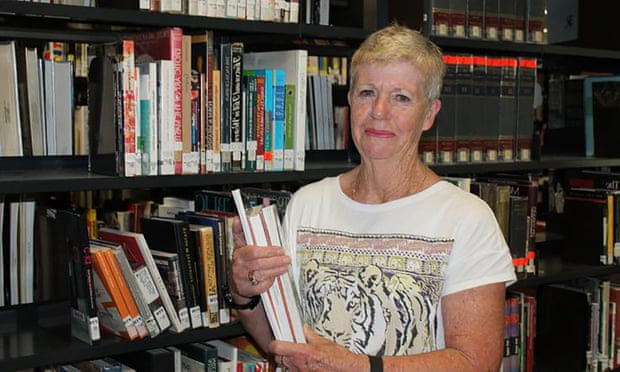 The year Joan Oliver was born, Robert Menzies was prime minister, the median price of a house in Sydney was $1,125 and there were just 6,239 women enrolled in university courses in Australia.

In 1949, higher education was mainly for men – wealthy, white men.

Oliver had always wanted the opportunity to study and now, at 75 years old, she has just completed a law degree from Victoria University.

“I’m really happy that I’ve done it, completed it,” she told Guardian Australia. “It was a big job but it’s done and dusted. Now I think: what am I going to do now?”

At 13 Oliver’s mother pulled her out of school and got her a job in a dressing gown factory, covering buttons. She hated it.

“My mother was one of the old-fashioned mothers: ‘Education is for boys, not girls, because girls are just going to get married and have children. So what’s the point in education?’” Oliver said.

“I didn’t want to leave school. For some reason l liked school. I always wanted to do more. I figured there had to be more to life than this.”

At 14, Oliver enrolled herself in night school to learn how to type and took her first clerical job working for a road construction job in Footscray.

She was 18 when she married Albert, and the pair had two young boys soon after. With working and raising her family, school fell off the agenda.

In 2000, Albert had a heart attack and wasn’t expected to live long. The pair had always planned to travel around Australia together so Oliver left her job and they went for it.

A keen golfer, she teed off on courses down the west coast until she hurt her neck and couldn’t play anymore. Painful, it ended up being the perfect opportunity.

“I thought: what am I going to do with myself now? Let’s go back to school.”

At 68, she went back to complete her VCE.

“I was absolutely terrified,” she said.

“I went to what was adult education that I think that the next oldest to me might have been 20. ​​At first I thought: oh my God, what have I done? This was sort of the era when young fellas wore their pants down around their knees.

“I’ll go I came to admire a lot of them. I taught them things they taught me things.”

At 70, Oliver became the oldest Victorian to complete her VCE. She came top of her class in English, was awarded a scholarship and enrolled in Criminal Justice.

It was in one of her first subjects her legal lecturer Stella Pardalis “almost grabbed her by the scruff of her neck” and convinced her to jump ship into law.

“She’s so quick and so on the ball – she’s just amazing. She lights up a room.”

Pardalis is now “threatening” Oliver to drag her back and make her do the six-month Practical Legal Training so she can legally use her degree. Oliver is worried about ageism after she struggled to land a placement while she was studying.

Pardalis said: “This is controversial but the fact she’s 75 should be a plus for any law firm to hire her, and unfortunately I don’t think it is.

“The law profession churns and burns, especially the larger ones. But [it] needs people like her, and age is a plus.”

Oliver said she would like to volunteer at a legal centre, specialising in domestic violence.

When asked what advice she would give to people considering a later-in-life career change, she said to just “do it”.

“Life’s too short to be wondering ‘what if?’. That’s what I find myself doing now, wondering what if I had done it sooner.