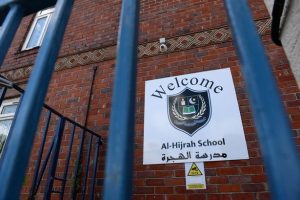 A legal battle over whether a Birmingham Islamic faith school’s policy of segregating boys from girls is unlawful and discriminatory has reached the Court of Appeal.

The first case of its kind, it is being seen as raising fundamental questions over pupils being taught “British values”.

A High Court judge in London ruled in November last year that Ofsted inspectors were wrong to penalise Al-Hijrah school, in Bordesley Green, on the basis of an “erroneous” view that segregation amounted to unlawful discrimination.

The judge ruled: “There is no evidence in this case that segregation particularly disadvantages women.”

But Mr Justice Jay allowed Ofsted, the body that regulates schools in England, to publish the rest of a controversial inspection report placing the school into special measures because books found in the school library gave tacit approval to domestic violence.

Ofsted is appealing against the High Court’s decision that the Al-Hijrah policy of separating the sexes from year five does not constitute discrimination on grounds of sex under the 2010 Equality Act.

Until now, the identity of the school has been kept secret and it has been referred to as “School X”.

On the eve of the appeal hearing, Associated Newspapers, publishers of the Daily Mail, applied to be allowed to identify the school.

Sir Terence Etherton, Master of the Rolls, sitting with Lady Justice Gloster and Lord Justice Beatson, said after hearing argument: “We have reached the clear decision on this application that we consider anonymity should be raised so that (the press and media) will be able to name the school.”

The judge said the court would give its full reasons later.

The case came to court after Ofsted produced a summer 2016 report that found there was discrimination under the equality laws and said the school, which has pupils aged from four to 16, should be placed in “special measures”.

Books discovered in the school library clearly treated women “as subordinate to men”, said the judge.

They contained views “which are inimical to fundamental British values”, including that a woman was not allowed to refuse sex to her husband and could be beaten by him in certain circumstances, “provided that this is not done ‘harshly”’.

The judge said the Ofsted report itself could not be released in its summer 2016 form because of its findings that School X’s segregation policy was unlawful.

The case raises several important issues, including those stemming from the fact that Ofsted is charged with “inspecting how well schools are promoting British values”.

Ofsted chiefs say they are concerned with whether a school regime that denies boys and girls in a mixed school full opportunity to interact and socialise together might fail adequately to prepare pupils for modern life in Britain.

In 2014, Al-Hijrah saw parent protests against the school being taken over by Birmingham City Council (see video above).