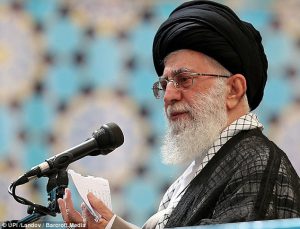 Young Iranians are having pre-marital sex, including homosexual relations, in far greater numbers than the regime in Tehran would like to admit, a report has revealed.

The report, issued by Iran’s parliamentary research branch and based on interviews with over 140,000 students, found 80 per cent of females acknowledged having pre-marital sex.

It also found 17 per cent of those surveyed identified as homosexual.

Young Iranians are engaging in pre-marital sex in far greater numbers than the regime in Tehran would like to admit, according to a government report

Young Iranians are engaging in pre-marital sex in far greater numbers than the regime in Tehran would like to admit, according to a government report

Women are entering into sexual relationships as early as middle school, according to the report which has been removed from the government website but obtained by FoxNews.com.

The report shows the growing difference between what the regime espouses and what is actually happening in Iran where two-thirds of their 75 million population are under the age of 35.

A female business student living in Tehran told the website that ‘we do what we want, especially when it comes to the bedroom’.

US led sanctions on Iran have also been blamed for the sexual liberation, as it has made it even more difficult for poor men to marry.

Supreme Leader of Iran Ayatollah Khamenei, seen here speaking at the anniversary of the death of founder of the Islamic Revolution Ayatollah Khomeini

The report suggested that young people could avoid getting caught out with their partner by utilising the Islamic practice of a temporary marriage, or sigheh.

The agreement allows both married and non-married men to have sex.