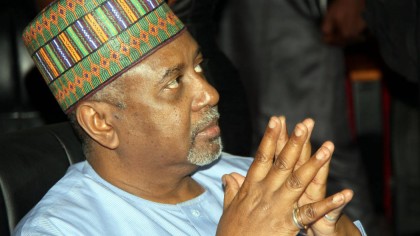 For the first time since his detention, former National Security Adviser, NSA, Col. Sambo Dasuki, retd, on Friday, opened up before the Federal High Court in Abuja, saying he was proud to have served former President Goodluck Jonathan’s government under the Peoples Democratic Party, PDP.

Dasuki, while testifying as the eight defence witness, PW-8, in the ongoing trial of erstwhile National Publicity Secretray of the PDP, Chief Olisa Metuh, said no court in Nigeria has convicted him for actions he took while in office from June 2012 to July 2015, “except my lord in the court of public opinion, based on their ongoing media trial”, he added.

Acknowledging before the court that he knew Metuh while he was PDP spokeman, Dasuki, said he could not recollect whether or not his office paid N400million to the defendant. Justice Okon Abang had in a ruling he delivered before the hearing commenced, declined to suspend Metuh’s trial to allow Dasuki who was summoned to testify as a witness in the case, to have access to his personal documents to enable him to refresh his memory.

Dasuki who has been in custody of the Department of State Service, DSS, since December 2015, had on Wednesday when he first mounted the witness box, insisted he could not remember details of the alleged transaction between him and Metuh without consulting his record. He was brought to court by the DSS on the strength of a subpoena Justice Abang directed should be served on the Director General of the security agency, Mr. Lawal Daura. The Economic and Financial Crimes Commission, EFCC, had alleged that Dasuki approved payment of the N400m from an account the office of the NSA operated with Central Bank of Nigeria, CBN, to Metuh.

The money was allegedly wired electronically into an account Metuh’s firm, Destra Investment Ltd, which is the 2nd defendant in the charge, operated with Diamond Bank Plc, prior to the 2015 Presidential election. Following Dasuki’s insistence that he could not give evidence in the matter until he was allowed to consult his personal files, Metuh, through his lawyer, Mr. Emeka Etiaba, SAN, begged the court for an adjournment of the trial to enable the subpoenaed witness to have access to his records.

While rejecting Metuh’s request as lacking in merit, Justice Abang, said he could not adjourn the trial for a witness to consult “imaginary documents” that are not part of the proof of evidence before the court. He said it was left to Metuh’s lawyer to use his professional skill to ask Dasuki relevant questions that would elicit answers favourable to the case of his client. The Judge said he had observed Dasuki’s demeanour in the witness box, saying he appeared to the court as a very”composed and relaxed” witness. He said Metuh’s lawyer was at liberty to ask the witness questions based on the proof evidence already tendered before the court, stressing that Dasuki’s answers would eventually constitute his testimony in the trial.

The court said Dasuki could elect not to answer questions posed to him as he would be cross-examined by the prosecution counsel based on his testimony with respect to the charge against the defendants. “It is my humble view that there are sufficient materials already in evidence to enable counsel to ask relevant questions to elicit favaourable answer from the witness”. “The witness is no longer the NSA, therefore his personal documents cannot be relevant to this proceeding”, the judge held. He said it was the duty of Metuh’s lawyer to have sought any document that would enhance his case from ONSA before he requested Dasuki’s appearance as a witness in the trial. Justice Abang held that the fact that Dasuki had remained in custody of the DSS despite bail that was granted to him by different trial courts, was not relevant to the proceeding in Metuh’s case. “The fact that the witness is in custody of the state has nothing to do with the ability of counsel to 1st defendant to ask questions that will elicit relevant answers. “What is relevant is the ability of counsel to the 1st defendant to elicit relevant evidence from the witness to enhance the success of his case.

The detention of the witness in custody of the state is not relevant, I so hold”. He said the duty of a witness was to give answers to questions asked by the examiner and not to give conditions that must be met before he could answer the questions. “This application for adjournment lacks merit, same is accordingly refused”, Justice Abang held, even as he directed Dasuki to commence his testimony.

Led in his evidence-in-chief by Metuh’s lead counsel, Dr. Onyechi Ikpeazu, SAN, Dasuki, said his understanding of ‘Due process duly followed’, written as the document that authorised payment of the N400m to the defendant, meant that all procedures that were laid down by the ONSA and any other federal regulations, were observed. Asked if he has ever been charged or convicted of any crime with respect to the 1st defendant, Dasuki said: “Except in the court of public opinion, I say No. I have not been charged or convicted of any unlawful act with respect to the 1st defendant”.

He said he was never indicted of engaging in any unlawful act or activity with Metuh while he held sway as the NSA. Asked who he took orders from while in office, the witness answered: “As the NSA then, my immediate boss that I was answerable to was the President who was Goodluck Jonathan, the President from 2010 to 2015”.

While being cross-examined by EFCC lawyer, Mr. Sylvanus Tahir, Dasuki who was asked to tell the court some of the duties of the NSA and if the position was only meant for people with military background, said: “Maybe you can ask the President who appointed me what he was looking for in an NSA when he appointed me. “I will leave you with your understanding that the office of the NSA is meant for only people with military training or background.

However, so far, I believe Dr. Bukar Shuaibu and Prof. Galadanji where the only people that did not have military or security background, who have occupied the office of the NSA”. Asked the job description of the NSA, Dasuki replied: “It has responsibility as regards issues of security, but for the details I will refer you to the National Security Agencies Act. “The NSA to the best of my knowledge is a public officer”. Asked if the office of the NSA is linked or affiliated with any political party, Dasuku said “I don’t know”. Queried if he ever met Metuh while serving as the NSA, the witness said: “I know Chief Olisa Metuh as a person. I know he was the Publicity Secretary of the PDP which was the party in government that I served proudly. “I don’t personally know the 2nd defendant, but as to whether I knew it officially, I have to make reference to my record. “I am not aware of the relationship or transaction that existed between the defendants and the ONSA.

Not without, record, I cannot remember”. EFCC lawyer then requested for a file of the proof of evidence already tendered before the court, and asked Dasuki to read a document attached to exhibit B, which was an e-payment mandate for N400m to be released to Metuh through his company’s Diamond Bank Plc account. The payment which was authorised on November 24, 2014, was said to be for security services. Dasuki however, insisted before the court on Friday that the document emanated from the prosecution who he said was “desperate to get a conviction”. He said: “That is why I insist on getting and referring to my own documents.

This is not the original document, it is a photocopy. On exhibit B itself, the prosecution asked the former NSA to tell the court the services Metuh’s firm rendered to ONSA that entitled it to the payment of N400m. Dasuki replied: “I have nothing to say. If you want an answer then I should have access to my records.

It will be useful for the counsel to get himself acquainted with the National Security Agencies Act”. He was then shown Exhibit D1 to which Dasuki told the court: “I have seen that there was an entry that purports payment from ONSA in the form of N400m into the account of Destra Investment Ltd”. At this juncture, the prosecution asked Dasuki: “Would it surprise you to know that the 1st defendant who is the sole signatory of the 2nd defendant, said the 2nd defendant has never executed any contract with any government, ministry or agency?” Before Dasuki could answer, both Metuh’s lawyer and that of his firm, Mr. Tochukwu Onwugbufor, SAN, objected, contending that it was wrong for the prosecution to cross-examine the witness based on falsehood.

They argued that Metuh never said such before the court, saying it would be wrong for the EFCC to base the question on an extra-judicial statement that was purportedly made by the 1st defendant. Consequently, EFCC lawyer applied and withdrew the question. Under further cross-examination, Dasuki confirmed to the court that he is also facing trial before the FCT high court over actions he took while in office as the NSA.

He identified Exhibits E7 and E8 as the two separate charges pending against him before the FCT high court. After EFCC lawyer said he no longer had questions for the witness, Dasuki was asked to step down from the box and was discharged by the court. Based on application by Metuh’s lawyer who told the court that he needed time to review the effort of the bailiff to effect service of a subpoena Justice Abang issued on October 23 to compel former President Goodluck to also appear as a witness in the trial, the matter was subsequently adjourned till December 4, 5 and 6. It will be recalled that Metuh had described both Jonathan and Dasuki as very crucial and vital witnesses in his bid to defend the seven-count charge against him.

Aside allegation that he received N400m from ONSA without executing any contract, EFCC alleged that Metuh was involved in a an illicit transaction that involved the exchange of $2m.