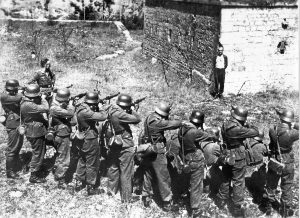 “In the summer of 1944, the Nazi and Soviet armies were preparing for a terrible and bloody battle right here in Warsaw. Amid that hell on earth, the citizens of Poland rose up to defend their homeland.”

With those words, President Donald Trump, speaking in Warsaw before a striking monument to the 1944 Warsaw Uprising, brought the spotlight of the world to an event that for too long has been relegated to a footnote in Western history.

In the hot summer of 1944, the Nazi German Reich, which had spread destruction across the European continent, was on the run.

In the west, American, British and Canadian forces, supported by Polish airmen, seamen and other allied forces, secured a foothold in Normandy and were beginning the fight to liberate France.

In the south, the allies had liberated Rome following the Battle of Monte Cassino, which was captured by soldiers of the Polish II Corps.

And in the east, the massive Soviet Army had crossed the pre-war Polish border as it pushed tattered German forces back towards Berlin.

By this point Poland, which had been the first country to resist Nazi Germany in 1939, had suffered close to five years of brutal occupation and terror. Additionally, Poland endured what few other European nations experienced, the dual occupation by Nazi Germany and the Soviet Union.

Between 1939–41 the Soviet Union and Nazi Germany undertook joint actions as outlined in the Molotov-Ribbentrop Pact and collaborated in the invasion and subjugation of Poland, a fact now willingly overlooked by Russian officials.

This experienced taught Poland’s leaders and military elites an important lesson that the West would learn for themselves all too soon: the Red Army carried with it a set of principles and beliefs that were incompatible with Western civilization rooted in Greco-Roman values. Poles knew that although the reign of the Nazi scourge was coming to an end, it would be replaced by something equally sinister.

Thus in 1944, in a determined—albeit perilous—effort, the Polish Underground State and Home Army decided to launch an uprising. The home army was one of Europe’s largest clandestine organizations, and was loyal to the Polish government in exile in London. As the German forces hastily retreated from Warsaw and the first Soviet tanks were spotted along the outskirts of the Polish capital, the lightly armed but highly determined Polish Underground State and Home Army rose up at in a bid to liberate Warsaw.

What followed next was a heroic fight for freedom against all odds.

For the next sixty-three days Polish insurgents fought the Germans and liberated swaths of the Polish capital. However it was to be in vain.

As President Trump explained, “From the other side of the river, the Soviet armed forces stopped and waited. They watched as the Nazis ruthlessly destroyed the city, viciously murdering men, women and children. They tried to destroy this nation forever by shattering its will to survive.”

The Polish strategy had been to quickly take command of the Polish capital in between the German retreat and ahead of the Russian advance. This action would allow the Polish forces to be masters of their own home and, as it was believed, would hinder the Soviet threat to Polish sovereignty.

However, with the Soviet offensive halted, and Stalin not allowing American and British planes permission to land on Soviet-held Polish territory to refuel, thus inhibiting sufficient Western aid from reaching the Warsaw fighters, the Germans were free to methodically and brutally crush the Warsaw Uprising.

For days the Germans went block by block in Warsaw’s Wola neighborhood, exterminating every man, woman and child they encountered. Forty thousand to fifty thousand people were killed in one week during the Wola massacre. Next Poland’s Old Town was surrounded and pummeled by bombardment until barely a building was left standing. Such actions continued for sixty-three days, as the city became a sea of ruins, and a quarter of a million Polish fighters and civilians were left dead.

So what was it all for? What did the Polish Home Army fight for?

For freedom. For a better future in which an independent Poland would proudly rise again.

But more importantly they fought for values, for a belief in a higher set of ideals, including pluralism, liberty and justice. These values that the war taught the Poles could only be protected by a strong nation state and strong military. These were values that they knew to be alien in the Soviet Union—the same Soviet Union that was responsible for deporting over 1 million innocent Polish civilians to gulags in Siberia. This Soviet Union was responsible for executing twenty thousand Polish officers and prisoners of war simply because of the uniform they wore. This Soviet Union tried to forcefully spread the Bolshevik Revolution across Europe in 1920, but was stopped at Warsaw.

Poles knew that Western civilization ended at their eastern border, and with it respect for Western values, traditions and beliefs.

Therefore, today, on the seventy-third anniversary of the Warsaw Uprising, let us pause to remember those who stood in defense of Poland and our Western values, including Julian Kulski, who was only a teenager when he took up arms in the Warsaw Uprising; and the late Zofia Korbonska, a heroic radio operator who informed the outside world about Nazi atrocities; and Barbara Syska, who served as a messenger during the Uprising, bravely dashing between units to pass along orders. All these individuals, who later settled near Washington, DC embody the ethos of the Polish nation.

Today, Poles carry on the memory of the heroic Warsaw Uprising fighters, not only by bowing their heads on August 1, but also by working each and every day to uphold the values for which they fought. From burden-sharing in the NATO alliance, to serving around the world where freedom is threatened, Poland remains committed to its fundamental values.

Just as in 1944, when Poland took a stand against tyranny, so too today does Poland stand against the tyranny of the Islamic State and help other countries, such as Ukraine, stand strong in the face of tyranny. Poles must keep the memory of 1944 alive so that these valuable lessons are not forgotten.

In the words of President Trump, “The memories of those who perished in the Warsaw Uprising . . . remind us that the West was saved with the blood of patriots; that each generation must rise up and play their part in its defense—and that every foot of ground, and every last inch of civilization, is worth defending with your life.”

May their memory always be with us.

Piotr Wilczek was appointed ambassador of the Republic of Poland to the United States and the Bahamas in 2016. He is a noted author, literary translator and expert in comparative literature  who has authored or edited over twenty books. Prior to being named ambassador, he served as professor and director of the doctoral studies program in the College of Liberal Arts at the University of Warsaw and previously served as head of the College.