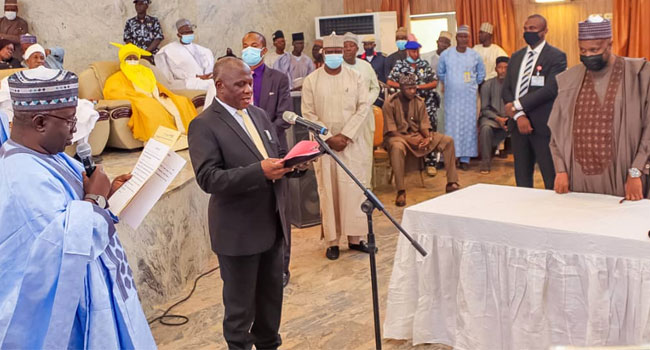 The swearing-in of Joseph Awak followed the retirement of Justice Mu’azu Abdulkadir Pindiga on January 1.

In his remark, Governor Yahaya urged the CJ to dispense justice to all without discrimination, fear or favour.
This is even as he reiterated his administration’s support for judiciary and legislature in discharging their statutory responsibilities effectively for the overall benefit of the good people of the North-Eastern state.

“On our part, this administration will continue to support the Judiciary and Legislature in discharging their statutory responsibilities effectively for the overall benefit of the good people of Gombe State,” he said.

“Let me reiterate that it is the desire of this administration to have a harmonious working relationship with both the Judiciary and the Legislature; the three arms of Government have to partner for the development of our dear State and our country’s young democracy, no doubt our unity is our strength.”

While commending Justice Awak on assuming office as the acting CJ, Governor Yahaya equally paid tribute to the immediate past CJ, Justice Mu’azu Pindiga for his service to the state.