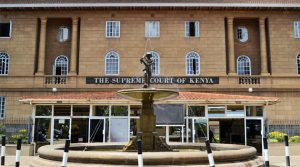 The International Commission of Jurists (ICJ) in collaboration with the African Judges and Jurists Forum has sent a group of eminent jurists to observe Supreme Court proceedings during the hearing of the presidential petition filed by the National Super Alliance.

The Trial Observation Mission (TOM) which is headed by the immediate former Zambian Chief Justice Earnest Sakala will meet Kenya’s Chief Justice David Maraga and all parties involved in the matter before hearings commence.

“The eminent jurists will also review the socio political climate in the country prior to the petition and will attend all the hearings of the presidential petition,” ICJ – Kenya Executive Director Samwel Mohochi said in a statement.

“The purposes of the meetings are to introduce the trial observation process to the parties and make them aware of the process and its modalities,” Mohochi explained.

Other members of the delegation are Justice (Rtd) Moses Chinhengo of Zimbabwe, Justice Key Oagile Dingake from Botswana as well as human rights lawyers Martin Masiga from Uganda and Brian Penduka from Zimbabwe.

In the statement, ICJ-K said the mission will make it clear to all parties – both the petitioners and the respondents – that the hearing will be under scrutiny hence encourage “adherence to human rights standards and the rule of law in the entire process.”

The mission is also expected to issue a report at the end of the trial in accordance with international best practices.

“Observers will develop a comprehensive report on the whole process with an aim to contribute to a more professional, independent, impartial and accountable judiciary; a more independent legal profession; and, a better adherence to the rule of law and separation of powers and international law and standards concerning the resolution of electoral disputes,” the ICJ statement said.

All the three respondents – the Independent Electoral and Boundaries Commission, Chairperson Wafula Chebukati and President Uhuru Kenyatta whose victory in the August 8 General Election is being challenged – are expected to file their replies by Thursday midnight.

NASA presidential candidate Raila Odinga and his running Kalonzo Musyoka filed the petition last Friday asking for the nullification of the presidential election which they said was marred with irregularities pleading with the court to order a fresh round of polls.

The outcome of the petition is expected by September 1.