A woman who became a  partner in a Law firm with a fake law degree is standing trial for tampering with public records and practising Law without a license. 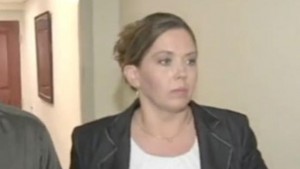 Kitchen allegedly forged numerous documents attesting that she was a licensed attorney, including an attorney’s license for 2014, supposed bar examination results, supposed records of her law school attendance and a check purporting to show she’d paid her registration fees.

According to the Attorney General’s office,all these claims are not verifiable.

Duquesne University told NBC station WJAC of Johnstown in December, when the state investigation began, that it had no record of Kitchen’s having attended. The state attorney’s registration office shows no listing for her.

The discrepancies were uncovered beginning when BMZ promoted her to partner in April 2014. The county district attorney referred the case to Pennsylvania Attorney General Kathleen Kane, and Kitchen suspended her practice in December pending the investigation.

According to documents on file in Huntingdon County Magisterial Court, Kitchen was charged with misdemeanor counts of fraud and unauthorized practice of the law. The state attorney general’s office said she was also being charged with felony tampering with public records. No date for a preliminary hearing has been set.

“There are things about the charges we don’t agree with, so we’re going to be fighting some of the charges,” Kitchen’s attorney, Caroline Roberto, told the Pittsburgh Tribune-Review.

Kitchen even rose to become the president of her county Bar. BMZ, the law firm, didn’t reply to a request for comment.