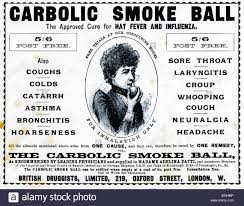 The Judgement in Carlill v Carbolic Smoke Ball Company was delivered on the 7th of December, 1892 in England. The Court of Appeal in the contract law decision held that an advertisement containing certain terms to get a reward constituted a binding unilateral offer that could be accepted by anyone who performed its terms. The decision is one of the most important and popular decisions in the legal history that has influenced many other decisions across the globe. It is notable for its curious subject matter and how the influential judges (particularly Lindley LJ and Bowen LJ) developed the law in inventive ways. Carlill is frequently discussed as an introductory contract case, and may often be the first legal case a law student studies in the law of contract. Courtroom mail remembers this important case 125 years after

The Carbolic Smoke Ball Co. made a product called the “smoke ball”. It claimed to be a cure for influenza and a number of other diseases, in the context of the 1889–1890 flu pandemic (estimated to have killed 1 million people). The smoke ball was a rubber ball with a tube attached. It was filled with carbolic acid (or phenol). The tube would be inserted into a user’s nose and squeezed at the bottom to release the vapours. The nose would run, ostensibly flushing out viral infections.

The Company published advertisements in the Pall Mall Gazette and other newspapers on November 13, 1891, claiming that it would pay £100 to anyone who got sick with influenza after using its product according to the instructions provided with it.

£100 reward will be paid by the Carbolic Smoke Ball Company to any person who contracts the increasing epidemic influenza colds, or any disease caused by taking cold, after having used the ball three times daily for two weeks, according to the printed directions supplied with each ball.

£1000 is deposited with the Alliance Bank, Regent Street, showing our sincerity in the matter.

One carbolic smoke ball will last a family several months, making it the cheapest remedy in the world at the price, 10s. post free. The ball can be refilled at a cost of 5s. Address: “Carbolic Smoke Ball Company”, 27, Princes Street, Hanover Square, London.

Mrs. Louisa Elizabeth Carlill saw the advertisement, bought one of the balls and used it three times daily for nearly two months until she contracted the flu on 17 January 1892. She claimed £100 from the Carbolic Smoke Ball Company. They ignored two letters from her husband, a solicitor. On a third request for her reward, they replied with an anonymous letter that if it is used properly the company had complete confidence in the smoke ball’s efficacy, but “to protect themselves against all fraudulent claims”, they would need her to come to their office to use the ball each day and be checked by the secretary. Mrs. Carlill brought a claim to court. The barristers representing her argued that the advertisement and her reliance on it was a contract between the company and her, so the company ought to pay. The company argued it was not a serious contract.

The Carbolic Smoke Ball Company, represented by H. H. Asquith, lost its argument at the Queen’s Bench. It appealed straight away. The Court of Appeal unanimously rejected the company’s arguments and held that there was a fully binding contract for £100 with Mrs. Carlill. Among the reasons given by the three judges were

(3) that purchasing or merely using the smoke ball constituted good consideration, because it was a distinct detriment incurred at the behest of the company and, furthermore, more people buying smoke balls by relying on the advertisement was a clear benefit to Carbolic (4) that the company’s claim that £1000 was deposited at the Alliance Bank showed the serious intention to be legally bound.