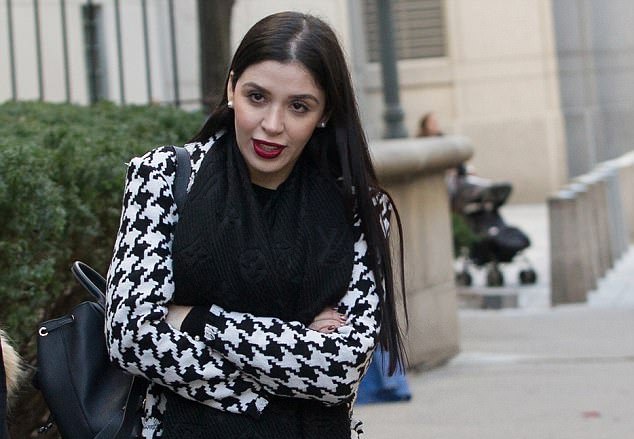 The 28-year-old beauty queen was pictured outside the facility in a glamorous houndstooth coat and black, Louis Vuitton scarf.

Aispuro brought their two young daughters with them. Neither was photographed.

They were joined by a female companion who tried to swat away photographers waiting outside.

Aispuro and the drug lord, whose real name is Joaquín Guzmán Loera, have been married since 2007.

She previously told of her fears that he would be murdered by Mexican prison guards while in their custody.

Aispuro has visited him several times since January this year, when he was moved from Mexico to the US to face trial.

Since then, El Chapo’s lawyers have claimed that he is going insane in prison and that his memory is ‘deteriorating’.

In November, a judge granted their request for him to undergo psychiatric evaluation.

At that hearing, he smiled and waved at his wife and daughters who were in the courtroom.

U.S. District Judge Brian Cogan granted their request but said he was not allowed to have any physical contact with the woman.

He urged them to have it done sooner rather than later, telling them: ‘Get her in there quickly.’

Judge Cogan also warned the prosecution, who told of the ‘thousands’ of documents of evidence they planned to use, to give El Chapo’s team enough time to review it before the case goes to trial in April.

Outside the courthouse, Guzmán’s lawyer said: ‘His memory is failing. He’s not remembering things.’

If he is found mentally incompetent, he may not have to stand trial for the 17 federal charges he faces.

In their filing in November, his attorneys said the notoriously harsh conditions inside the prison have left him with a ringing in his ears, a sore throat and mental health problems.

They say that in the last month, he has forgotten people and places and claim that staff at the prison treat him unfairly by not allowing him to buy bottled water or batteries for his radio.

Guzman was extradited to the US in January a year after being captured in Mexico. He had been on the run for six months after escaping from a maximum security prison in through a tunnel which led to the shower in his cell.

Guzman faces 17 federal charges relating to the drug enterprise he ran as the head of the Sinaloa cartel between the 1980s and when he was caught.

His capture in 2016 came after a now famous interview with American actor Sean Penn and Mexican actress Kate Del Castillo who visited him in the Sinaloa mountains at one of his safe houses while he was still on the run.

Their meeting was the subject of a recent Netflix documentary in which Del Castillo, 40, told how she fell in love with Penn while they worked together to meet Chapo and was devastated when he betrayed her to write an article about it for Rolling Stone.

Guzman operated the Sinaloa cartel for decades, evading capture by the country’s law enforcement, and became a hero for local communities who saw him as a Robin Hood figure who looked out for them more than their government did.

He was first incarcerated in the 1990s. In 2001, he bribed guards in a prison in Jalisco to help him escape.

El Chapo then spent more than a decade on the run before being recaptured in 2014.

He was only in bars for another year then escaped for a second time to the humiliation of Mexican authorities in July 2015.

By the time of his second escape, he had already struck up a rapport with telenovela actress Kate Del Castillo.

Once out on the run, El Chapo’s lawyers contacted her and asked if she would like to meet him to make a movie about his life.

They signed over the rights to her as a show of good faith.

Del Castillo, eager to find success in Hollywood, brought Sean Penn in on the venture and the pair traveled to Sinaloa to meet with El Chapo in October 2015.

They were being monitored by the Mexican government at the time and days later, a SWAT team went to the location where they had met to try to find him but he escaped.

In the recently released Netflix documentary, The Day I Met El Chapo, Castillo tells how Penn blindsided her during the meeting by asking El Chapo for an interview for Rolling Stone.

He then appeared in an extraordinary video at Penn’s behest to prove he was alive and that their correspondence was genuine.

Before Rolling Stone published the piece, Chapo was recaptured in another location. Five men died in the shoot-out.

Officials have since spoken anonymously to say intelligence honed in on the safe house by monitoring the construction of a tunnel there in the days before he arrived.

On the night of his capture, they said a large taco order to the address gave them reason to believe he was there.

Penn insists he never tipped off authorities about his meeting and tried to block the Netflix documentary for coming out because he felt it suggested he was complicit.

Despite the fact that El Chapo was ultimately captured at a house which neither Penn nor Castillo ever visited, Mexican authorities said their meeting and correspondence with him and his associated helped them