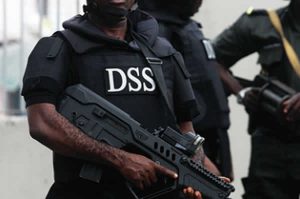 As controversy continues to trail Friday night’s arrest of judges by officers of the Department of Security Service (DSS), indications have emerged that their Judgments on Anambra, Zamfara, Kogi and Ekiti states governorship tussle may be the bone of contention.

The raids were carried out by agents of the DSS in Abuja, Port Harcourt and Gombe and the judges affected are of the Supreme Court and Federal High Court.

Daily Sun research has unveiled some of the cases the judges handled in recent times.

Anambra PDP leadership crisis: The INEC had filed a case to the Supreme Court seeking clarification on its ruling on the January 29, 2016 that reinstated Mr. Ejike Oguebego as the Chairman of the PDP, Anambra State chapter.

Following the judgment of the Supreme Court recognizing the Oguebego- led state Executives of the PDP in Anambra, controversy ensued as to whether some serving lawmakers from the state and National Assembly who were not on the list submitted by the Ejike Oguebego-led state executive had been sacked by the court.

INEC said it was confused because the beneficiaries of the judgment had approached it to issue certificate of return to them as lawmakers representing the state.

It was based on this that INEC approached the apex court for some clarifications.

But delivering ruling on the application, Justice John Okoro said the issue of primaries was not included in the appeal that came before it even as it was still pending at the High Court, before primaries were held.

Justice Okoro said that the dispute on whether the Certificate of Return should be withdrawn from the serving lawmakers and given to the list of candidates of the Oguebego faction was not an issue before the court and that the court never made any pronouncement to that effect.

Mr Oguebego had sued on behalf of themselves and others including Mr Chris Uba, who is the Anambra South Senatorial zone’s candidate for the apex court to determine who were the legal and validly nominated candidates of the party to stand for the last general elections for the party in the state.

The faction said that going by the ruling, the list of nominated party candidates in the last election from the Oguebego-led executive of the Anambra PDP is the only one to be recognised by the INEC.

Mr. Okoro said the appellant must also relate each of the documents to the specific area of the case in respect of which documents were tendered. He added that the appellant ought to have shown that figures, representing over-voting, if removed, would result in victory for the petitioner.

Kogi guber tussle: Justice Okoro was also one of the seven-man panel of the Supreme Court who sat on the disputed Kogi State governorship election that upheld Kogi State governor, Yahaya Bello’s election. He delivered the lead judgment in the third appeal filed by the African Democratic Congress (ADC) read by Justice John Okoro, while Justice Musa Datijo Mohammed read the lead judgment in the appeal by the Labour Party (LP).

Rev King’s death sentence: He delivered judgment in the celebrated case of the convicted General-Overseer of the Christian Praying Assembly, Chukwuemeka Ezeugo, a.k.a Rev. King

In a unanimous judgment, a seven-man panel of Justices ‎of the apex court led by Justice Walter Onnoghen, upheld the death sentence that was earlier handed to Ezeugo by the Lagos State High Court.

Consequently, the court in its lead verdict that was delivered by Justice Sylvester Ngwuta, dismissed the appeal the convicted clergy lodged before it.

Justice Ngwuta who noted that “the ‎facts of the case could have been lifted from horror film”, resolved all the 12 issues Ezeugo raised in his appeal.”

Ekiti guber: Justice Ngwuta delivered the lead judgment in the disputed  governorship election in Ekiti State, between the APC and Governor Ayo Fayose.

In a lead judgment delivered by Justice Ngwuta, the Supreme Court upheld the earlier decisions of the Court of Appeal and the Ekiti State Governorship election tribunal, which had both ruled that the petition challenging Fayose’s victory lacked merit.

Justice Ngwuta dismissed the appeal filed by the petitioner-the APC and resolved all four arising from the appeal against Fayose’s victory.

Justice Ngwuta’s latest judgment was the Kogi State governorship election petition delivered on September 30, 2016  where the court gave its reasons for its decision affirming the election of Governor Yahaya Bello.

In the said judgment, the Supreme Court  said it dismissed the appeal of James Faleke of the All Progressives Congress (APC) on Kogi governorship elections because the reliefs sought were an “aberration, not known to law.’’

Justice Adeniyi has delivered a number of judgments and prominent among them is the illegal arms case brought by the Federal Government against three Lebanese nationals, including co-owner of Amingo Supermarket, Mustapha Fawaz, and owner of the popular wonderland recreation centre. In a 16-count charge, the government had specifically alleged that Fawaz who is equally the owner of Wonderland Amusement Park Resort in Abuja and his compatriots were members of the military wing of a Lebanon based terrorist organization, Hezbollah.

Government had further alleged that Thahini, who it said had attempted to escape from the country via a Middle East airline, was deeply involved in terrorism financing in the country.  During the hearing of the case, Government counsel, Mr. Simon Egede called 10 witnesses and maintained that the accused persons were in charge of the operations of Hezbollah in Nigeria and tendering a total of 25 exhibits in the course of the trial.

Among the exhibits admitted against them by the court included guns, cartridge belt holders with ammunition, pellets for Air Rifles, 150 cartridges, 158 rounds of cartridges,  two bound copies of still pictures of arms and ammunition that were allegedly discovered in one of their premises at No 3 Gaya Road, off Bompai Road in Kano, two video CDs and witness statements.

Other arms allegedly uncovered at the underground bunker owned by the suspects were anti-tank weapons, rocket-propelled guns and anti-tank/anti-personnel mines.

According to the security operatives that conducted the search, the arms and ammunition were properly concealed with several layers of concrete and placed in coolers, drums and bags neatly wrapped. The 3rd accused who was convicted, Roda, was not only apprehended inside the bunker where the arms were recovered, but also confessed that he was commissioned by another Lebanese who is an in-law to Fawaz,  Abdalhassan Tahir, currently at large, to be servicing the guns.

But in his judgment, Justice Adeniyi dismissed the 16-count criminal charge that was preferred against the Lebanese co-owner of Amigo Supermarket, Mustapha Fawaz, by the Federal Government.

However, the court found the 3rd accused person, Tahal Roda, guilty on two counts of criminal conspiracy contrary to section 1(14) (a) (i) of Miscellaneous Offences Act, CAP M17, LFN, 2004, and sentenced him to life imprisonment on each of the counts, stressing that his sentence should run concurrently.  Equally discharged by the court yesterday was another Lebanese, Abdullahi Thahini, who was arrested at the Mallam Aminu Kano International Airport on May 11, 2013, and the sum of $61, 170, recovered from him.

In his judgment, trial Justice Adeniyi, upheld their argument, maintaining that the prosecution, failed to prove the terrorism allegation against them beyond every reasonable doubt. Justice Adeniyi held that there was no evidence before him to prove that Nigeria has proscribed Hezbollah as an international terrorist organization.

Case on defected PDP lawmakers to APC: Justice Adeniyi also gave judgment in the case of defected lawmakers wherein, he gave an order of perpetual injunction restraining the lawmakers who defected from the Peoples Democratic Party (PDP), to the All Progressives Congress, APC, from effecting any leadership change in the House of Representatives.

The PDP had on January 7, 2015 instituted a suit seeking to restrain the House of Representatives from altering the composition of its leadership.

The party had commenced the action following the defection of 37 lawmakers, who won election on its platform, to the opposition APC. The defection had initially given the APC a slim majority in the House. The majority was later reversed when some APC lawmakers decamped to the PDP.

Anambra senatorial election case: The recent judgment from Justice Adeniyi was the protracted Anambra State PDP leadership crisis where he affirmed the sanctity of the process that led to the election of Stella Odauh, Andy Uba, Mrs. Margery ‎Okadigbo, Chris Azubogu and other members of the National Assembly from Anambra State.

The judge dismissed the originating summons filed by Okonkwo and his cohorts.

He consequently held that since Ubah, Oduah, Okadigbo and others were nominated by the PDP’s NEC, their nominations remained valid.

Conversely, the judge ruled that Annie Okonkwo and 43 others nominated by the PDP’s state exco in Anambra were not validly nominated and they could therefore not lay claim to the election.

To support his position, the judge cited the Supreme Court’s judgement in the same matter which was delivered earlier this year.

Okonkwo had dragged the Independent National Electoral Commission before the court. However, 20 others including the PDP, Ubah, Oduah, Okadigbo, Azubogu‎ and others whose interest would be affected by the case applied to be joined and were dully made parties to the suit.

Justice Ademola dismissed the suit saying it was an abuse of the processes of the court.

In the judgment that lasted for about an hour, Justice Ademola held that the plaintiffs’ claim that they were the rightfully nominated candidate of the PDP in the National and State House of Assembly election in March and April 11, 2016 could not stand in the face of the law because they were unlawfully nominated by the state executive of the party. The court held that it has been established by the Supreme Court that the power to conduct primary election, nomination of candidates and submission of list of candidates to the INEC was vested on the National Executive Committee (NEC) of political parties.

The judge said, in the instant case the plaintiffs, having emerged from a primary election conducted by the state executive of the PDP, submitted themselves to an act of illegality and as such could not seek legal backing for such a nomination.

The trial judge referred to the Supreme Court judgment of January 29, 2016 and the ruling of the apex court delivered on February 24, 2016 where the issue of the powers of the PDP NEC and the state executive committee was ventilated to the effect that the state organ of the party had no power under the constitution of the party and the Electoral Act to nominate candidates for the purpose of general election.