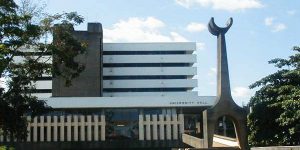 The Federal High Court, Osogbo, Osun State has said that it lacks jurisdiction to hear a case challenging alleged irregularities in the appointment of the Vice-Chancellor of the Obafemi Awolowo University, Ile-Ife.

The court, during its sitting on Monday, noted that such a case should be taken to an industrial court.

The OAU workers had approached the court over alleged non-compliance with the varsity’s Statute 6 guarding the process of VC selection.

The workers also urged the court to compel the Federal Government to dissolve the council, among other prayers.

The workers had embarked on protests challenging the process that led to the emergence of Pro. Ayobami Salami as the new vice-chancellor.

They accused a former VC of the institution, Prof. Bamitale Omole, whose tenure expired on June 24, 2016, of influencing the outcome of the screening.

The protest by the workers, which led to the closure of the university, compelled the Federal Government to appoint an acting VC, Prof. Anthony Elujoba, for the institution.