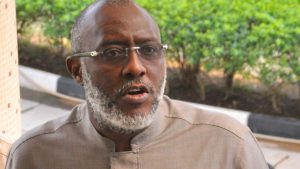 The documents, which were tendered by the fifth defence witness (DW5), Mr. Richard Ihediwa, comprised a breakdown of payments of N31 million( About $98,000.00) to different media outfits for advertorials in the name of PDP for the 2015 general election.

When the documents were first tendered on Tuesday, they were opposed by the prosecution counsel, Sylvanus Tahir, on several grounds.

But at the resumed hearing yesterday, the defence counsel, Chief Emeka Etiaba (SAN), submitted that the prosecution did not seem to apply the word ‘custodian’ correctly.

“This is a witness who seeks to tender his own evidence. We submit that these documents come from proper custody, but assuming that they did not, it was still not enough reason to reject them,” he said.

On the issue of proper foundation, Etiaba held that the prosecution got it all wrong. According to him, they are original documents and as such, should be admitted in evidence.

He further said that the certificate of identification with regard to the money paid into the witness account was enough foundation to accept the documents in evidence.

Arguing on another issue raised by the opposing counsel that the witness was not the maker of the document, Etiaba stated that it was a case of ‘poetic justice’ as, according to him, the same court had ruled in favour of the prosecution on a similar issue.

In his ruling, however, Justice Okon Abang, held that even though no submission was made as to how the witness came across the documents, they contained relevant evidence and would consequently be admitted.

He also ruled that being legal documents of account, it did not matter whether the witness was a maker or not, especially as he has knowledge of the inflow of account.

“The witness also has personal knowledge of the documents. They certify the requirement of law and are hereby admissible,” Abang ruled.

Consequently, the matter was adjourned till November 24 and 30.