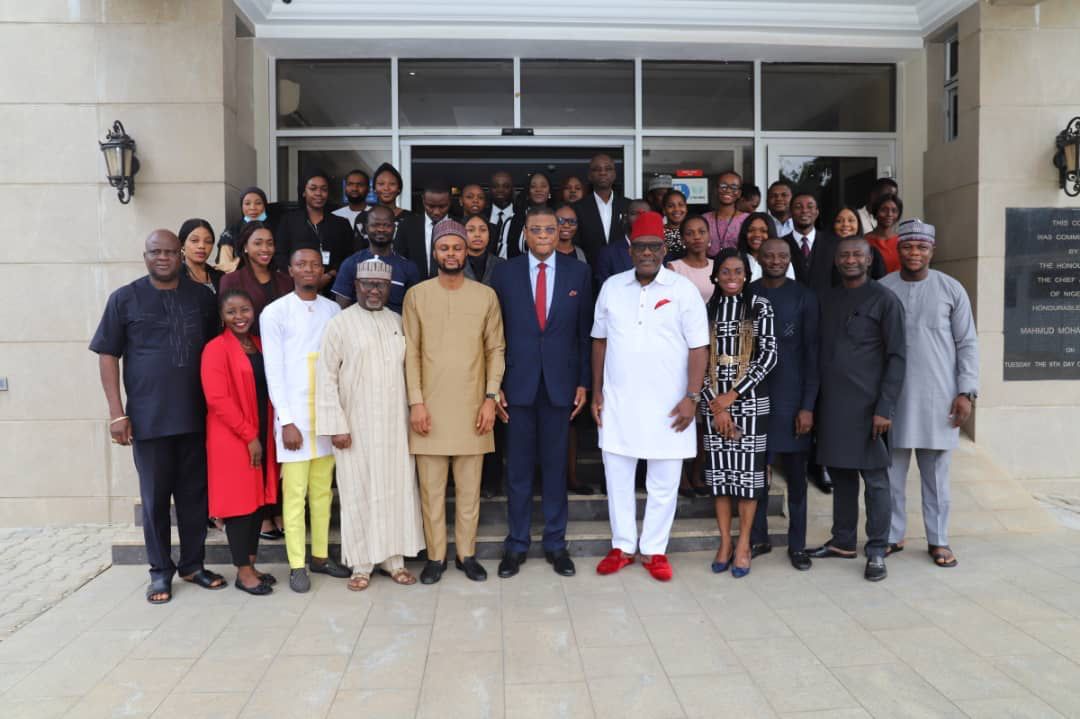 Hon. Justice O. A Adeniyi at the 7th edition Of The Annual Professional Training And Mentoring Program For Young Lawyers Of J-K Gadzama LLP said that Chief Joe-Kyari Gadzama, SAN is a trailblazer who should be imitated by the NBA.

According to Hon. Justice O.A Adeniyi, “Chief Joe-Kyari Gadzama, SAN is in active competition with the NBA as a body for the provision of legal services and the NBA should learn from the Learned Silk”. Flowing from this quote, the prestigious J-K Gadzama LLP held the 7th edition of its Annual Hon. Justice Chukwudifu Oputa JSC (Rtd) Professional Training and Mentoring Program for Young Lawyers on Saturday, 4 June 2022. The hybrid event with the theme, “Emerging Areas of Law: The Role of Young Lawyers” witnessed the attendance of young lawyers from different states across the country.

The Mentoring Program has been a long standing tradition of the law firm, and is in accord with the Principal Partner’s mandate of alleviating the plight and bridging the knowledge gap of young lawyers in the legal profession in Nigeria.

As a result of his passion for the welfare and growth of young lawyers, Chief Joe-Kyari Gadzama, SAN, the principal partner of J-K Gadzama LLP, who despite his tight schedule, was present at the Mentoring Program to chip in his bit of advice to the young lawyers before embarking on a journey same morning. While giving his opening remarks, he urged the young lawyers present to pick a mentor and carve out a niche for their legal practice by specializing in two or three aspects of legal practice. Mr. Mela Audu Nunghe, SAN, Mr. Ganny Ajape, Mr. Steve Abar, Mr. Gotom Samson (Secretary of Jos Branch NBA), Mr. Francis Oronsaye, Mr. Madu Joe-Kyari Gadzama and Mr. Jerry Musa Ombugadu were in attendance at the program.

The Chairman of the occasion, Hon. Justice Husseini Baba Yusuf, who is the incumbent Chief Judge of the High Court of the Federal Capital Territory, was ably represented by Hon. Justice O.A Adeniyi of the High Court of the Federal Capital Territory. His Lordship during his remarks commended the Learned Silk, Chief Joe-Kyari Gadzama for his continuous efforts towards developing young lawyers through his annual mentoring programs. He noted that the Learned Silk is indeed a pacesetter in the field of mentorship for young lawyers and he urged the Nigerian Bar Association to follow the footsteps of the Learned Silk to ensure that the legal profession is left in secure and safe hands.

Dr. Oluwakemi Pinheiro, SAN, the founding partner of Pinheiro LP, who was the keynote speaker at the program delivered a stellar presentation on the the topic, “Attaining Self-Development to Becoming an Iconic Legal Practitioner in Emerging Areas of Law”. In the wise words of the Learned Silk, he stated that “A lawyer is a student until he dies. Once he considers himself not a student anymore, the lawyer inside him dies”. While concluding his session, the Eminent Silk reiterated the essence of identifying an area of specialization and harnessing the opportunities prevalent in that field.

Other discussants who keyed into the theme by making presentations on various emerging areas of law include: Mr. Darlington Onyekwere, Partner at J-K Gadzama LLP who set the high bar for other discussants by delivering an outstanding presentation on legal advocacy; Ms. Anne Agi, a law lecturer at the University of Calabar and the Chief rapporteur of NBA, who during the second session of the event made a top-notch presentation on space law, a seemingly interesting area of law with little development in Nigeria; Ms. Layo Olaiya, an associate at Olaniwun Ajayi LP and Mr. John Olamiposi, an associate at Omaplex Law who during the third and fourth sessions delivered exceptional presentations on the rapidly growing areas of Fintech law and Artificial Intelligence in Nigeria respectively.

In the words of Ms. Anne Agi, “the mainstream is already chocked. As such, lawyers should continuously transform into something else”. In accordance with these words, we believe that the program was indeed enlightening and informative as the keynote speaker and discussants did substantial justice to the theme. At the end of each session, the mentees asked a host of interactive questions to the mentors who eagerly provided insightful answers to these questions based on their wealth of knowledge and experience.

Young lawyers present agreed that the Chairman of the Mentoring Committee of the Body of Benchers for Young Lawyers, Chief Joe-Kyari Gadzama, SAN has shown immense dedication and commitment towards ensuring that young lawyers are adequately equipped with the requisite knowledge to succeed in the legal profession.