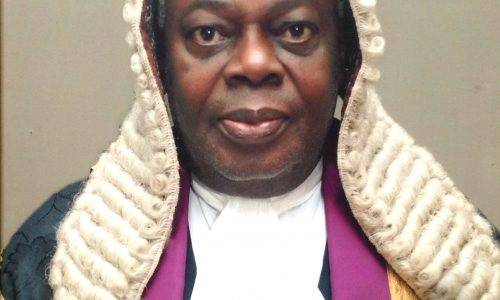 The Nigerian Bar Association mourns the passage of one of its great leaders and Legal Titan Chief Idowu Sofola  SAN who died peacefully in the early hours of  Saturday 24th March 2018 and had since been buried in accordance with Islamic Injunction.
Chief Sofola  was a very prominent Nigerian Legal Practitioner who was born on 29th September 1934 in Ikene-Remo, Ogun State. He attended St. Savior School in Ikene-Remo for his primary education. In 1952 he was admitted into Eko Boys High School where he finished his secondary education. Upon completion of his secondary education, he had a stint at the Lagos State Judiciary as a court clerk in 1958 before travelling to the United Kingdom where he obtained his L.L.B degree from London School of Commerce and Holborn College. In 1962, Chief Sofola was called to the English Bar and in the same year he was enrolled as a Barrister & Solicitor of the Supreme Court of Nigeria.
In his years as a Legal Practitioner, Chief Sofola was an erudite legal juggernaut of exemplary character. He had a deep knowledge of the law which indeed helped in his approach to several legal matters. He was a very active member of the Bar to the extent that he was elected a General Secretary of the NBA from 1979-1982, a position which he utilized effectively in setting the foundation of the Bar upon which subsequent leaders of the bar had used as a roadmap in directing  the affairs of the NBA.  In 1989 Chief Idowu Sofola was elevated to the prestigious rank of Senior Advocate of Nigeria (SAN). In 2012  he succeeded Justice Dahiru Musdapher as the Chairman of the Body of Benchers (the highest decision making body of the Nigerian Legal Profession) a position he held till 2013.
Internationally, Chief Sofola also made his mark as he was the first African to be the General Secretary of the International Bar Association.
Until his demise, Chief Sofola was a very active member of the Nigerian Bar Association, International Bar Association,  Body of Benchers (Life Bencher), etc.
He was happily married to Chief Olusola Sofola and the marriage was blessed with Five Children which includes: Sina Sofola SAN, Hon. Justice Yetunde Pinheiro who has  been recently appointed a Judge in the Lagos State Judiciary.
The President of the NBA; Abubakar Balarabe Mahmoud OON SAN on behalf of the National Executive Committee and entire members of NBA extends his condolence to the entire members   of  Sofola’s family of Ikenne in Ogun State, the Body of Benchers, the Nigerian Bar Association  and the entire  Nation on the loss of this illustrous son of Yoruba Land, a Bar Leader per Excellence  who had contributed immensely to the development of Legal Profession both in Nigeria and abroad.
It is our fervent prayer that  Almighty Allah  will grant him Aljannah Firdaus.
The 8th day Fidau Prayer will be on Saturday, the 31st Day of March 2018 at the Ansar-Ud-Deen Primary School, Old  Ayepe Road, Ikenne, Ogun State at 11am.
NBA enjoins all our members to attend this event in appreciation of our departed very Senior Bar Leader.
*Dated this day 29th March 2018*
*Aare Isiaka Abiola Olagunju, Esq.*
*General Secretary, NBA*
Category: NewsTag: Nigerian Bar Association by Editor