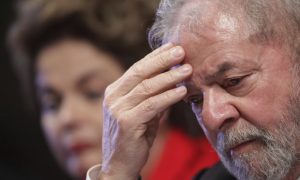 Luiz Inácio Lula da Silva, once the most popular president in Brazil’s recent history, has been sentenced to nine years and six months in prison after being found guilty on corruption and money-laundering charges.

Although Lula, as he is universally known, will remain free pending an appeal – and his supporters denounced the sentence as political persecution – the ruling marks an extraordinary fall for a leader Barack Obama once called “the most popular politician on earth”.

Passing sentence on the former president, Judge Sergio Moro said Lula took part in the corruption scheme, in which billions of dollars were paid to middlemen, executives and politicians for fat contracts.

“Symbolically [the sentence] has a very heavy weight, not just for him but for the country, that voted not just twice for him but twice for the candidate he indicated,” said Carlos Melo, a professor of political science at Insper, a business school in São Paulo.

Born into barefoot poverty in Brazil’s arid north-east, Lula ran the powerful metal workers’ union before helping found the Workers’ party with fellow leftists, unionists and intellectuals in 1980. He fought and lost three elections before winning the first of two mandates in 2002. Thanks to transformative social policies and a booming economy, tens of millions of Brazilians escaped poverty during his rule.

No other Brazilian politician in recent decades has been able to capture popular imagination with such verve. Although his reputation has been tarnished in recent years, he currently leads polling for the 2018 election.

If his conviction is upheld by a higher court, however, he will be ineligible to stand.

“He will dramatize this process, of course, he will say this is a process to stop him being a candidate. The condemnation will enter the political game,” Melo said. “The Workers’ party will exploit this politically and say Lula is a victim.”

Wednesday’s sentence was related to accusations that Lula benefited from about £590,000 in bribes from a construction company called OAS, which the prosecution alleged was paid in the shape of a seaside duplex apartment, renovated at Lula’s request.

In his ruling, Moro said that Lula had bought a simpler apartment in the same building worth about £53,000, and the company had upgraded him.

Prosecutors said the payment was part of around £21m that OAS paid in bribes to Lula’s Workers’ party in return for lucrative contracts as part of two oil refineries that Petrobras was building, Moro wrote in his sentence.

“The responsibility of a president of the republic is enormous, and, consequently, so is his guilt when he practises crimes,” Moro wrote.

‘There is no crime’: Brazil’s ex-president keeps faith in party and justice system

During his trial in May, Lula gave five hours of testimony in which he angrily proclaimed his innocence and denied ever owning the apartment. His lawyers, Cristiano Martins and Valeska Martins, attacked the sentence in a statement.

“President Lula is innocent. For over three years, Lula has been subject to a politically motivated investigation. No credible evidence of guilt has been produced, and overwhelming proof of his innocence blatantly ignored,” they said. “We will prove Lula’s innocence in all unbiased courts including the United Nations.”

Other leftist groups also condemned the ruling. “The conviction came without any truth,” the Homeless Workers’ Movement said in a statement. “It is evident that the sentence is a form of judicial shortcut to remove Lula from the political dispute.”

But the sentence divided Brazilians. Angel Inoue, 36, a TV scriptwriter from São Paulo, said she was pleased. “I know the (Workers’ party) started as a cool idea, but at a certain point, this idea was substituted for power and greed,” she said.

Mariluce de Souza, 35, an artist and community leader from the Complexo do Alemão favela in Rio de Janeiro, said Lula’s case was more closely linked to his party than him personally.

“All politicians are guilty of some sort of corruption,” she said.

Lula’s government was first hit by a corruption scandal called the Mensalão, in which lawmakers were allegedly paid to vote for government measures. He was still re-elected in 2006 and left office with an 87% approval rating. When his successor Rousseff was impeached in August 2016, she and Lula denounced the process as a “coup”.

Rousseff was succeeded by her former running mate, Michel Temer, whose administration has also been dogged by graft scandals.

Temer himself is facing corruption charges that could see him tried by Brazil’s supreme court if two-thirds of Brazil’s lower house agree in a vote expected in the coming days.