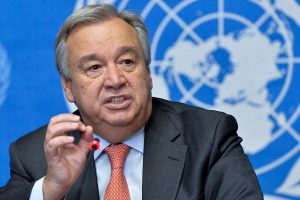 UN Secretary-General António Guterres has condemned the series of Boko Haram terrorists attack in Borno in which many people were killed and dozens injured.  H e said that those responsible for such heinous attack should be brought book. Guterres, in a statement issued by Stéphane Dujarric, Spokesman for the Secretary-General, called for those responsible for the senseless attacks to be brought to justice. The UN chief extended his deep condolences to the Government and people of Nigeria for the loss of life and wished a speedy recovery to those injured. He called for “those responsible for these repeated heinous acts in Nigeria and neighbouring countries to be swiftly brought to justice”. The Secretary-General reiterated “the United Nations solidarity and support to the Government of Nigeria in its fight against terrorism and violent extremism”. The UN scribe also renewed “the commitment of the United Nations to support efforts within the framework of the counter-terrorism initiatives of the Lake Chad Basin Commission”.