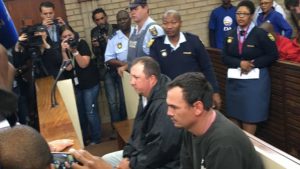 A black South African man who was allegedly forced into a coffin by two white farmers for trespassing says he was scared for his life.

Victor Mlotshwa was speaking outside court in the north-eastern town of Middelburg where his alleged attackers appeared before a magistrate.

“I thought they were going to kill me,” he said.

A 20-second video of the incident has been circulating on social media, causing outrage.

The hashtag #RacismMustFall is now being widely shared on social media in South Africa.

The BBC’s Pumza Fihlani in Middelburg says that inside the magistrates’ court, the two accused, Theo Martins Jackson and Willem Oosthuizen, stood with their heads bowed as journalists and community members took photographs of them.

They have been charged with kidnapping and assault with intent to cause grievous bodily harm. They have not entered a plea.

The two have been remanded in custody until 25 January as prosecutors said they needed time to investigate, including authenticating the video.

The footage, which was shot on 17 August, has only recently surfaced. It shows a white man forcing a black man inside a coffin, and threatening to pour petrol over him and set it alight.

The 20-second clip was filmed in August

Mr Mlotshwa told reporters that he had been walking home through the men’s farm, which is near Middelburg, 162km (100 miles) north-east of Johannesburg, when he was kidnapped and accused of trespassing.

“There’s a pathway through the farm to the township where I live and many of us walk through there. I tried to explain to them why I was there and they just kept beating me,” he said.

“They threatened to pour petrol on me, I pleaded for mercy and they wouldn’t listen.”

He said he was kept tied up for hours.

“I have nightmares about that day. It traumatised me.”

Mr Mlotshwa only reported the matter after the video was circulated on social media.

Outside court, three political parties – the governing African National Congress (ANC), the opposition Democratic Alliance (DA) and Economic Freedom Fighters (EFF) – all jostled for the attention of the crowds that came to support Victor Mlotshwa.

The video has highlighted racial tensions in some communities here. A farm worker, who identified himself only as Bheki, told me that abuse at the hands of farmers was common. “We have a difficult time as black workers in this community and we are afraid to speak up, we don’t want to lose our jobs.”

South Africa has come a long way since the days of white-minority rule – but this case has been a reminder for some that racism did not end with apartheid and in small communities, change comes at a slow pace – if at all.