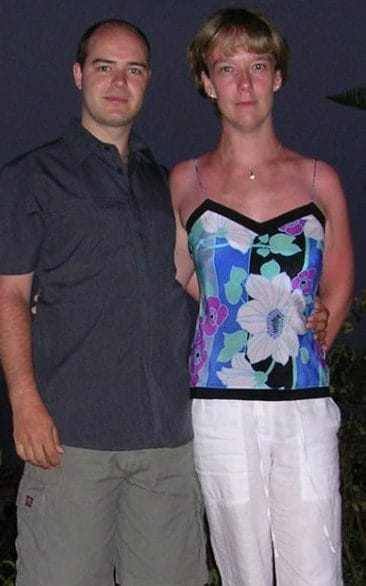 A battered husband installed a hidden camera in his home to film his wife attacking him as he feared police wouldn’t believe him, a court has heard.

Neil Tweedy, 45, had endured violence from wife Helen since 2005, including an assault on their wedding night in 2008 where she kicked, punched and smothered him with a duvet, before making him sleep on the sofa.

Mr Tweedy eventually reported the crimes after Mrs Tweedy continued the abuse after the birth of their daughter, now four.

The victim secretly recorded the assaults at the couple’s £200,000 semi-detached home in Greater Manchester because he was afraid that police would not believe him without evidence. Over a two-month period three incidents of Mrs Tweedy slapping her husband over the head and swearing at him were caught on camera, once in front of their daughter.

The couple met 16 years ago and appeared happy to family and friends. Facebook pictures showed them holidaying in Amsterdam and the Greek island of Zakynthos.

She posted a comment on a photo of Mr Tweedy saying: “fab holiday and will hopefully go back this year…..and yes he does look good!”

At Manchester magistrates court, Mrs Tweedy admitted three charges of common assault by beating and was given a restraining order banning her from contacting her husband, as well as 120 hours of unpaid work.

Prosecutor Robin Lynch said: “The first three years were described by the complainant as ‘amazing’ but the defendant began to drink in private and there sometimes there was some controlling behaviour.

“In 2005 on a family holiday they were with the defendant’s parents and she shoved and pushed him and slapped him in the face. The complainant said from then on it became a regular thing.

“Despite this, they married in 2008 but that night he was assaulted and kicked and punched to the head and body. She placed a duvet over his head for the assault to continue and he slept on the sofa.

“A couple of months prior to these offences the complainant installed a camera to record her behavior because he didn’t think anyone would believe his story. That recorded three incidents.

“A couple of months prior to these offences the complainant installed a camera to record her behaviour because he didn’t think anyone would believe his story.

Mr Tweedy later said: “Helen is a fantastic and brilliant teacher and gets to work for 7.30am and doesn’t leave till 7.30pm. She’s just so hard working.

“The problem was just alcohol, she was admitted to hospital twice in the past year and could have died. Something had to change.

“Hopefully now she can get the hope she needs.”

The research also found that male victims are three times more likely than female victims not to tell anyone about the abuse.