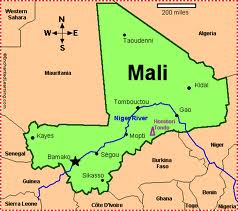 Five Malian soldiers and one civilian were killed in central Mali on Tuesday during an ambush on a convoy of the president of the High Court of Justice, the defence ministry said in a statement.

It was not clear who was responsible for the attack, but the high level target and army deaths point to the deteriorating security situation in Mali due to the growing reach of jihadist groups that roam country’s vast desert expanses.

The convoy of Abdrahamane Niang was traveling between the towns of Dia and Diafarabé in the Mopti region, about 500 km northeast of the capital Bamako, when it was attacked. “Niang and his wife were recovered by the army. However, we report six deaths: five soldiers of the Malian army and the driver of the Honorable Niang,” the statement said, adding that others had been wounded. No other details of the attack were given.

The rise of jihadist groups, some linked to al Qaeda and Islamic State, continues to destabilize Mali, four years after French troops beat back an Islamist insurgency that began in 2012. Around 4,000 French soldiers remain as part of Operation Barkhane, where they work alongside around 10,000 UN peacekeepers in Mali. Attacks on peacekeepers, aid workers and the Malian military are common.

Four U.S. Special Forces troops were killed earlier in October in neighbouring Niger by fighters believed to belong to a local Islamic State affiliate operating out of Mali. The Group of Five, an anti-terrorism taskforce of soldiers from Mali, Niger, Burkina Faso, Chad and Mauritania, plans to launch its first joint operations this month to target Islamists in the Sahel.