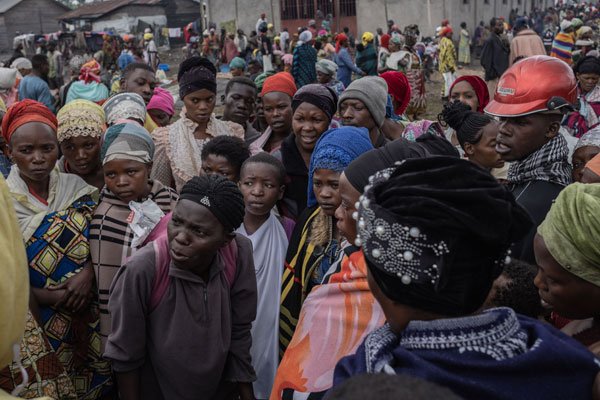 Hundreds of people hit the streets in two cities in the Democratic Republic of Congo on Wednesday, AFP journalists said, to protest neighbouring Rwanda’s alleged meddling in the country’s affairs.

Relations between the two central African states, which have long been tense, boiled over last week after DRC accused Rwanda of backing the resurgent M23 rebel group active in its volatile east.

DRC’s government suspended flights from Rwanda’s national carrier on Saturday as part of the diplomatic spat, and detained two Rwandan soldiers it accused of trespassing on Congolese soil before releasing them on Monday.

On Wednesday, hundreds of protesters gathered in front of the Rwandan embassy in DRC’s capital Kinshasa, according to an AFP journalist.

“We have come to demand the expulsion of the Rwandan ambassador and the severing of diplomatic relations, the aggressor country,” said Bienvenu Matumo, from the Congolese rights group Lucha.

Several hundred people also demonstrated in the eastern city of Bukavu, a city on the Rwandan border, more than 1,500 kilometres (940 miles) from the capital.
An AFP correspondent there said the protesters toted banners bearing pro-military slogans and chanted “Rwandans go home”.

Fresh clashes erupted recently between the Congolese army and the M23, a primarily Congolese Tutsi group, and last week spread close to Goma, an important commercial hub of 1 million people in eastern DRC.

The militia seized the city in late 2012 before the army quelled the rebellion the following year.

But it resumed fighting late last year after accusing the government of failing to respect a 2009 agreement under which its fighters were to be incorporated into the army.
DRC government spokesman Patrick Muyaya on Monday repeated the accusation that Rwanda is backing the group, but added that the administration remains open to dialogue.
Rwanda denies that it backs the M23, and late last month accused the Congolese army of firing rockets into its territory.

Bintou Keita, the special representative of the United Nations secretary general in DRC, on Wednesday urged all parties to show “calm and restraint”.

Recent M23-linked fighting in eastern DRC has displaced 72,000 people, according to the United Nations.