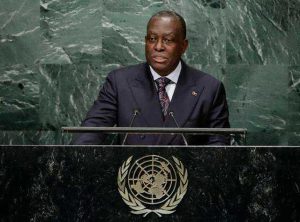 Portuguese prosecutors are bringing charges of corruption, money-laundering and forgery against Angolan Vice President Manuel Vicente as part of an investigation in Lisbon, Portugal’s attorney general’s office said Thursday.Vicente is suspected of bribing a Portuguese magistrate to favor him in two investigations, a statement said. It said Vicente was at the time of the alleged crimes the head of Angolan state oil company Sonangol.

The magistrate, Vicente’s lawyer and his representative in Portugal are also accused in the case, called Operation Fizz.

The attorney general’s office said it would inform Vicente of the charges via Angolan authorities. Vicente’s whereabouts weren’t immediately known.

Rui Patricio, Vicente’s lawyer in the Angolan capital, Luanda, reportedly said that neither he nor his client were aware of the charges.

“I’m astounded that my client has been accused, not only because he had nothing to do with the facts mentioned but also because he has never even been questioned about them,” Patricio said in a written statement reported by the Portuguese national news agency Lusa.

The fact that Vicente wasn’t questioned “invalidates the (legal) process,” he wrote, according to Lusa.

Investigators allege Vicente paid Portuguese magistrate Orlando Figueira, who was arrested a year ago, about 760,000 euros ($808,000) to drop two investigations that involved alleged money-laundering and Angolan investments in Portugal. Authorities have seized about 512,000 euros from the magistrate. Those amounts were found in banks in Andorra, the attorney general’s office said.

International human rights groups have long accused Angola’s leadership of corruption. The southwest African country is rich in oil and diamonds but most of its people live in poverty. Activists allege the government and its political and military supporters have siphoned off much of Angola’s wealth.