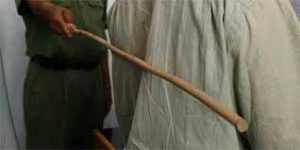 A Karmo Grade 1 Area Court, Abuja, on today ordered that Ibrahim Bala should be given six lashes of cane for stealing a gas cylinder. The judge, Alhaji Abubakar Sadiq, who ordered the punishment, warned the convict to desist from committing crime. Bala of no fixed address was charged with theft. He had admitted committing the crime and prayed the court to temper justice with mercy. He claimed that he was under the influence of bad friends. Earlier, the prosecutor, Florence Auhioboh, had told the court that one Baba Umar of Ministry of Defence, Abuja, reported the matter at the Gwarimpa Police Station on May 4, 2017. According to her, the complainant said that Bala criminally entered into their compound and stole a gas cylinder. Auhioboh said that he was arrested in the process, and that during police investigation, the cylinder was recovered. She told the court that the offence was punishable under Section 288 of the Penal Code.