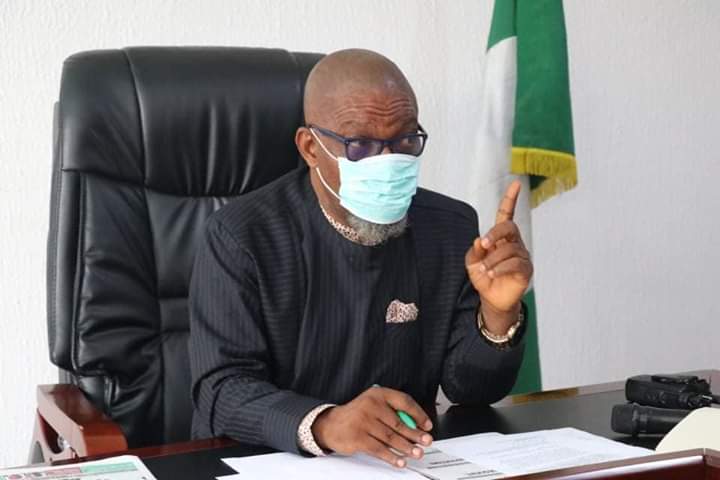 The Chief of Staff to Governor Ikpeazu, Mr ACB Agbazuere has responded to the letter of Nigerian Bar Association signed by the Publicity Secretary,Kunle Edun in respect of the trial of Emperor Ogbonna an Aba based Lawyer.

His responds obtained by Courtroom Mail is stated below:

TEXT OF A PRESS BRIEFING BY THE CHIEF OF STAFF TO THE GOVERNOR OF ABIA STATE.

My attention has been drawn to a press statement issued by Kunle Edun, the National Publicity Secretary of Nigerian Bar Association on behalf of the Nigerian Bar Association (NBA) with regard to one Barrister Emperor Ogbonna which has also been published on the front page and page 16 of The Punch Newspaper of today Thursday April 30, 2020. As Chief of Staff to the Governor who was also mentioned in the press statement, I am compelled to put the records straight to wit:

The facts put forward by NBA Aba branch which NBA National relied on are copiously false, erroneous and misleading.

Paragraphs 1,2 and 3 of the NBA press statement clearly confirm that at least Mr. Ogbonna has accepted that he re-shared a post in his Facebook page that Governor Ikpeazu went to India and took an oath before a Hindu god to mortgage Abia State. He also made other posts on this. Governor Ikpeazu has never visited India all his life and as a law-abiding citizen, he took recourse to the law instead of self-help.

The Governor reported this case of cybercrime to the Police and the Police arrested Mr. Ogbonna and charged him before the Federal High Court in Umuahia for cybercrime and not terrorism as the misinformation from NBA Aba opines.

On 28th April, 2020, the Federal High Court in Umuahia granted Mr. Ogbonna bail and adjourned the matter to 25th May, 2020 for hearing. This is the much involving the Governor and we are ready to prosecute the case. No government official even attended Court on the said 28th April, 2020, what more entering the Court premises for any arrest.

I have asked questions and I understand that the said Emperor Ogbonna was now arrested because he had made other divisive and subversive comments on his Facebook page against President Buhari and the Federal Republic of Nigeria referring to Nigeria as an Islamic Republic, calling for the impeachment of President Muhammadu Buhari, calling for the removal of Northern Nigeria from Nigeria, describing Northern Nigeria as an illiterate population and the biggest problem of Nigeria and inciting comments that Buhari hates the Igbos. How does this concern Governor Ikpeazu or Abia State government officials?

The NBA headquarters and the public can now see that NBA Aba carried their emotions too far and thus misinformed NBA headquarters, hence the unwarranted and manifestly embarrassing press statement. I know that the Nigerian Bar Association leadership will never support crime but I am nonetheless appalled that my NBA could hurriedly issue a press statement on an issue without hearing from the other side, not even a phone call to any official of the Abia State government. This is bad.

We cannot, however, be blackmailed into abandoning the course of justice.

No one is above the law and Mr. Ogbonna as a lawyer should have known the consequences of his actions and that Nigeria has a Cyber Crime Act.