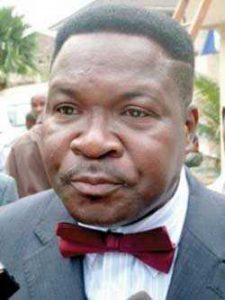 Mike Ozekhome, a Lagos-based human rights lawyer, is in trouble as the Federal High Court in Lagos,Nigeria  ordered the temporary forfeiture of the sum of $230,000.00(N75 million) found in his account. The money, domiciled with Guaranty Trust Bank (GTB), was discovered by the Economic and Financial Crimes Commission (EFCC). Mike Ozekhome (SAN) The presiding Judge, Justice AbdulAziz Anka, gave the order on Tuesday when he delivered ruling in a Motion Ex-parte filed by the anti-graft agency. The motion sought that Ozakhome’s account be temporary frozen on the ground that the money deposited in his account on 15th December, 2016, was suspected to be proceeds of crime. The application was filed before the court by Rotimi Oyedepo. Arguing the motion, an EFCC lawyer, Mr. Idris Mohammed, informed the court that the application was brought before the court pursuant to section 29 of EFCC Act. Idris said that three exhibit marked exhibit 01, 02 and 03 are attached with the Motion Ex-parte in addition to an affidavit of urgency sworn to by an investigator of the agency, Tosin Owobo. He urged the court to grant the application ordering temporary forfeiture of the account for 120 days. Acceding to the request of EFCC, Justice Anka ordered that Ozekhome’s account with the sum of N75 million domicile with Guaranty Trust bank be forfeited for 120 days. The judge also ordered that any party not satisfied with the ruling could appeal.