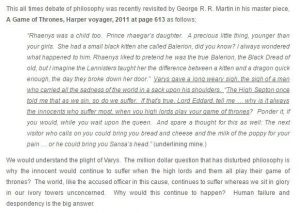 A local judge is in the spotlight after he quoted a passage from George R.R Martin’s novel A song of ice and fire in his ruling.

The book has been adapted into the dramatic and popular television series Game of Thrones.

Judge D.K Njagi Marete, in his ruling on a recent case at the Employment and Labour Relations court in Kericho, quoted a passage from the book that posed: Why is it always the innocents who suffer most, when you high lords play your game of thrones?

A hawk-eyed Kenyan noticed the quote after the ruling was posted on the Kenya Law website and shared it on social media.