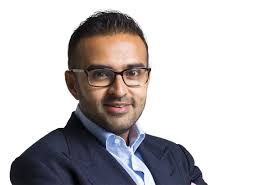 Judge Philip Moor ruled that Thakkar, and not his mother and sister, was the owner of disputed assets in the divorce. He found that the 35-year-old owned 100 percent of Mara Group Holdings Ltd. and other corporate entities.

The result will have ramifications in the proceedings where a judge will have to decide how much Thakkar — described in videos posted on his foundation’s website as “Africa’s Youngest Billionaire” — is worth. Thakkar says he has assets of 445,532 pounds ($553,000) while his wife, Meera, says he’s far richer.

Thakkar, his father and sister all testified over three days in a bid to persuade the court that Ashish had no control over Mara Group Holdings and Inspire Group Holdings Ltd. Thakkar has argued that the beneficiaries of his companies are his mother and sister, a claim the judge called “a blatant lie.”

“I regret to say that I consider the whole thing to be palpable nonsense,” Judge Moor said in the ruling handed down Feb. 10 and made public Tuesday. “It follows that I find I have been repeatedly lied to by all three respondent Thakkar witnesses, which has extremely serious consequences for the rest of their evidence.”

Spokesmen for both Ashish and Meera Thakkar declined to comment. The release of the ruling was delayed for more than a week so confidential business information could be redacted.

The decision extends a legal battle over the less than five-year marriage that has cast a spotlight on the entrepreneur. Based on his disclosed public and closely held assets, Thakkar could have a net worth of about $450 million, according to the Bloomberg Billionaires Index.

“Ashish is clearly a very charismatic and engaging character. He exudes charm and enthusiasm,” Moor said. “He is the entrepreneur and the money maker.”

While the Thakkar case is at the London High Court, similar issues have reached the country’s top court before. The ex-wife of oil trader Michael Prest won a Supreme Court ruling giving her the right to force offshore companies owned by her ex-husband to turn over assets as part of a 17.5 million-pound settlement in 2013.

Prest’s lawyers argued at the time that the courts had no right to “pierce the corporate veil” of his companies to fund the settlement as they were separate entities and unrelated to the marriage.

The ruling brings London back into focus as one of the “divorce capitals of the world,” with judges set to rule on a string of multi-million pound cases in the coming months. A former executive at Dallas-based Lone Star Funds, Randy Work, has asked appeal judges to consider that he should be handed a larger share of the $225 million fortune amassed while married because he made a special contribution where his wife didn’t. A judge in a lower court said the couple’s estate should be split equally among them.

A case involving Khoo Kay Peng, Malayan United Industries Bhd’s chairman, should come to an end later this year when a judge will have to decide how much of an estate potentially worth 440 million pounds will go to his wife of more than 40 years, Pauline Chai. Peng lost repeated attempts to have the divorce settled in Malaysia.

Thakkar’s story began in Idi Amin’s Uganda. He was born in the U.K. after his family was among Asians the dictator expelled in 1972. They returned to Africa when he was a child, this time to Rwanda, where his family lost everything during the genocide in 1994, Thakkar says in his 2015 autobiography, “The Lion Awakes: Adventures in Africa’s Economic Miracle.”

Thakkar’s own success has prompted him to be branded Africa’s youngest billionaire. He’s described that way in a 2013 video on the YouTube channel for his charity, the Mara Foundation.

He is introduced as that at conferences and asked about it in media interviews. At 15, after the family had returned to Uganda, Thakkar sold a laptop to his dad’s friend, triggering the realization he could be a trader. His father gave him $5,000 start-up cash, and he started flying to Dubai to buy cheap computer products, which he sold from a tiny shop in central Kampala.

He expanded his business by setting up a Dubai-based company. He later started a packaging factory in Uganda and partnered with an Indian IT services company to help them gain entry in new markets across Africa, according to his websites.

Thakkar and Diamond met at a World Economic Forum conference in May 2013 through their respective foundations, struck up a friendship and decided that they could start a banking venture together.

Thakkar remains a non-executive director with Atlas Mara, which he and Diamond founded with the idea of buying up stakes in banks across sub-Saharan Africa. The company, domiciled in the British Virgin Islands, has raised hundreds of millions of dollars from investors through share offerings since 2013.

Diamond is looking for ways to revive confidence in Atlas Mara after the company lost about 80 percent of its value since selling shares to the public more than three years ago. The company is said to be planning to name a financial adviser to evaluate a potential sale of the business.