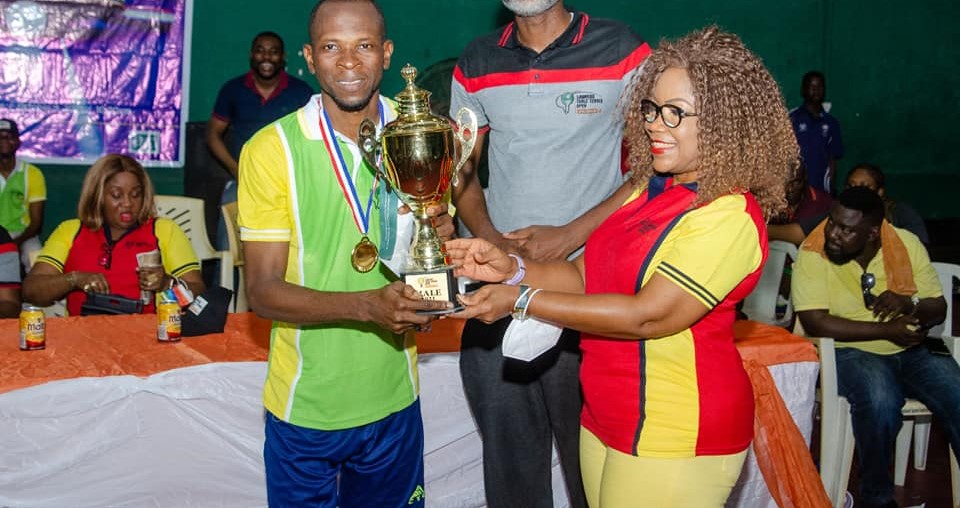 Lawyers Table Tennis Open (Mfon Usoro Cup) has grown to be the most popular  and anticipated sporting event for Lawyers in Nigeria. The first event was held in 2009 in Lagos. It has continued to hold in Lagos and Lagos lawyers have continued to win the tournament until 2018 when that was disrupted by a Lawyer from Lokoja, Yahaya Olarewaju won the trophy. In fact in 2018, no Lagos based lawyer made it to the top three. In 2019, Mr Olarewaju won again while Ajila Oladapo from Oyo, came second. The tournament did not hold in 2020 because of Covid-19 restrictions.

In 2021, Ajila Oladapo lifted the trophy. Courtroom Mail‘s Aduke caught up with him for a few questions.

1. First of all Mr Oladapo, what prompted you to join the competition from Oyo?

2. In 2021 you defeated the defending Champion Yahaya Olarewaju (Lokoja) the first lawyer not based in Lagos to win the tournament. What was the feeling like?

I was so desirous of winning the LTTO(Mfon Usoro cup)  in my first appearance in 2019, unfortunately, we played a game of best of three in the Final match, In fact, I lost the opportunity of winning the first set while I gave away 10- 7 lead, I won the second set but lost the third set. Though, it was not a result I wanted, but I promised myself that I must try to win the subsequent tournament. Due to Covid 19, the event was not conducted in 2020, but thank God and I feel so excited I  achieved the feat in 2021 by defeating the same  player who defeated me in 2019. It was a keen encounter but I feel so great I won at last.

3.  The first time you took part in the tournament in 2019, you came 2nd. The second time in 2021 you took the trophy.  That looked like a hostile takeover .How did you do it.

Yes, as I have said I lost in the final in 2019, luckily for me, I had the recording of the final game on my phone, I studied the playing pattern of my opponent, I observed that he was the one attacking me all through, I have to work on my attacking style as well coupled with the way I defend and I think it worked for me greatly in our encounter at the finals in 2021.

4. This year’s event is coming up in September, are there players that give you jitters as you plan to defend your trophy?

In any tournament of this nature, there is usually so much pressure on the defending Champion, each and every participating players keep improving and poses great threat. As the defending champion, I have to give in all my best to defend the title. For me, all players that entered Semifinals in the last event may pose serious threat in this year’s event. But I Know it is going to be a spectacular contest this year.

5. No Lagos based lawyer has won the male category after 2017. In fact the closest they got has been third place in 2019 and 2021. Some of them have vowed to change that this year and bring the trophy back to Lagos. Are you bothered?

I’m not really bothered. Some of Lagos based participants are good as well but I am optimistic, the trophy is not staying in Lagos once again this year.

6.  What do you like about the tournament and what do you think about more Lawyers getting involved in sports?

In fact, I must commend the sponsor and organizers of this wonderful tournament.  Apart from the fact that is always fun there,   this tournament brings a lot of us together, is it the health benefits we do gain from the sport we should talk about. It is just so lovely. I wish more lawyers continue to participate more especially considering the health benefits in the sport. I used to be a persistent malaria fever patient before I started playing Table Tennis, I noticed since I started playing  tennis , my persistent Malaria fever has gone and now minimal.

7. Who do you consider the greatest sportsman of all times?

In the game of Table Tennis, my greatest sportsman is Ma Long and Jan Over Wardner. In football, CR7