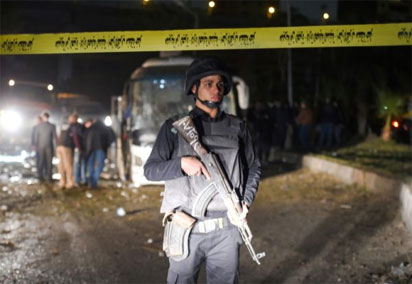 Egyptian police killed 40 alleged “terrorists” in a crackdown on Saturday after a roadside bomb hit a tour bus claiming the lives of three Vietnamese holidaymakers and an Egyptian guide.

The suspects were killed in separate raids in Giza governorate, home to Egypt’s famed pyramids and the scene of Friday’s deadly bombing, and in the restive Sinai Peninsula, the interior ministry said. Thirty “terrorists” were killed in two raids in Giza and the remaining 10 were killed in the North Sinai, a statement said without directly linking them to the tour bus bombing. It said authorities had received information the suspects were preparing a spate of attacks against state and tourist institutions and churches.

“Information was received by the national security that a group of terrorists were planning to carry out a series of aggressive attacks targeting state institutions, particularly economic ones, as well as tourism, armed forces, police and Christian places of worship,” the ministry said. A security source said the raids took place early Saturday morning, hours after Friday evening’s roadside bombing which officials said hit a tour bus in the Al-Haram district near the Giza pyramids killing the three Vietnamese holidaymakers and their Egyptian guide. There was no immediate claim of responsibility for the bombing, the first attack to target tourists since 2017.

Saigon Tourist, the company that organised the trip, said the Vietnamese tourists were “on their way to a restaurant for dinner” when the bomb exploded. Company officials were heading to Cairo on Saturday and plans were made to allow some relatives of the victims to also fly to Egypt. Friday’s bombing was the latest blow to Egypt’s vital tourism industry, which has been reeling from turmoil set off by the 2011 uprising that forced veteran president Hosni Mubarak from power. In July 2017, two German tourists were stabbed to death by a suspected jihadist at the Red Sea resort of Hurghada.

In October 2015, a bomb claimed by a local affiliate of the Islamic State group killed 224 people on board a passenger jet carrying Russian tourists home from the Sinai peninsula. While tourism has picked up since 2011, the 8.2 million people who visited Egypt in 2017 are still a far cry from the 14.7 million who visited in the year before the uprising.