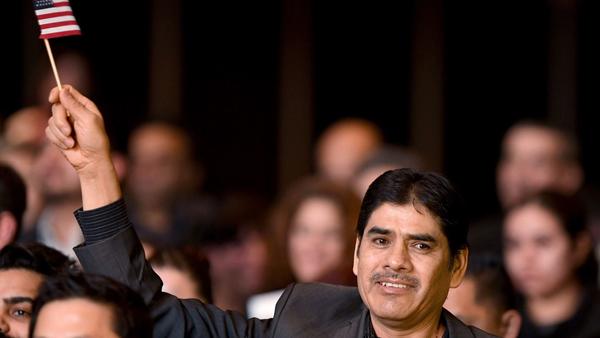 The 142 immigrants who became U.S. citizens Monday during a naturalization ceremony in Highland Park came from 46 countries across the globe.

They included Javier Gainza Gonzalez, a 35-year-old electrical engineer who left Spain to seize a professional opportunity nearly a decade ago.

“I was born in a small city of northern Spain called Pamplona, and I came here for an incredible opportunity to work,” explained Gainza Gonzalez, after the citizenship ceremony.

“After a couple of years, I got used to everything here and I love it.” he said. “I am grateful for the opportunity to become a citizen.”

Rogelio dela Rosa from the Philippines also was part of the mosaic of citizens raising their hands and reciting the Oath of Allegiance in unison in the auditorium at Highland Park High School.

After coming to the U.S. seven years ago to be close to his adult daughter, dela Rosa became a U.S. citizen at the age of 65. His son-in-law Chris Fabillon said preparing for citizenship — particularly the oral interview — was difficult because his father-in-law speaks little English.

“He’s never had a problem writing in English, but he was a little intimidated speaking in his non-native language,” said Fabillon, noting he went twice for the oral interview but passed the civics test with ease.

For Jordanian-born Samaher Saleh, the journey to citizenship started when she and her U.S.-born husband Omar met in Jordan and later married. Semaher Saleh accompanied her husband back to the U.S. about decade ago. Two of the couple’s four children were on hand Monday to watch their mother become a U.S. citizen.

“You sort of take it for granted when you are born here,” said Omar Saleh. “You forget how much of an honor it is. It is a great privilege to be an American.”

“Obviously it was a long process, and there was a lot of studying involved,” said Abdullah, who is from Dubai in the United Arab Emirates.

The roll call of countries, a traditional part of the every naturalization ceremony, finished with Romania, Russia, Singapore, Slovakia, Spain, Syria, Ukraine, United Kingdom and Vietnam.

It was the third time in as many years that Highland Park High School has hosted a naturalization ceremony. The idea originated with the student board of the Highland Park-Highwood Legal Aid Clinic.

During the ceremony, the school’s Principal Elizabeth Perez Robertson shared the story of how her parents had fled Havana, Cuba for the U.S. after learning on New Year’s Eve in 1959 of the sweeping changes coming to Cuba. They became U.S. citizens in 1965, she said.