The last time the Nigerian Bar Association held its annual general conference in Lagos was in August 2009.This year,they will come back to Lagos for another gathering. Courtroom mail takes lawyers  down memory lane as it posts the 9 most memorable pictures of the event that took place 8 years ago.The pictures were taken exclusively by Courtroom mail .Lawyers who belong to the Lagos branch of the NBA will relate with these pictures more but number 1 will wow all lawyers.

9.   Even before selfie was born,people were photobombing other people .If you were at the NBA annual general conference in 2009,you would have heard of that hilarious incident where a young lawyer photobombed Femi Falana while he was granting an interview.In case you missed it,below is that picture.Courtroom mail  got that picture exclusively

8 .  Chijioke Okoli was barely 5 weeks old as the Chairman of NBA Lagos as at the time the conference began  that year.He was on ground to supervise the  distribution of  conference materials.This moment deflated those who accused him of arrogance when he contested for chair.Courtroom mail captured those moments.

7. The picture below is that of Hannibal Uwaifo at the Friendship center of the NBA conference  in 2009.However,he is not the one we want you to see,look behind him,you may recognise someone you know.Sorry,the picture was taken at night.lol

6. That day in August 2009 at the NBA Conference,some lawyers went local at the friendship center, drinking palm wine in the traditional way.That incident was very hilarious and caught the attention of many lawyers who posed for  pictures with them.The founder of courtroom mail posed for a picture with those great guys too. 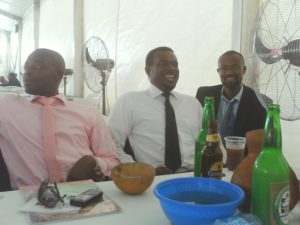 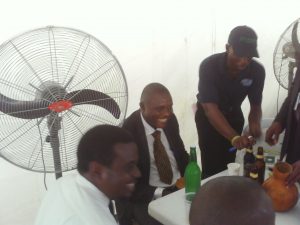 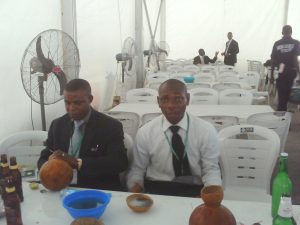 3. This Picture below is a privilege to lawyers.Shift your attention from Theodore Ezeobi. Only very few lawyers can boast of seeing this head before. You must be a titled man to have seen it but courtroom mail clicked the camera at the right time.So if you sometimes wonder what is inside that hat,this is it.Figure out on your own who owns the head .For now,we are at large.

2. Shut the doors,remove the wig and the gown and you will discover how good lawyers can be shaking their bodies to the rhythm of good music. For us,this two lawyers were the best dancers at the 2009 NBA annual general conference party in Lagos.Courtroom mail camera caught them dancing.We identified one of them as Emeka Eze(Mekuso) a lawyer from Aba branch.